RT @NatureComms: An assessment of inter-regional freshwater salinization from @Josefin_Thors @WaterBier and others demonstrates the importa…

Irrigation is a found te be a common factor explaining salinization of freshwater in basins worldwide. See the late… https://t.co/vLXX7fdjv7

This is how we like it: use of #PCRGLOBWB by another institute (Institute of Environmental Sciences CML @UniLeiden… https://t.co/CMFTCtBxA8

Download:
The water balance model (no routing, no water use) is available from the following public repository:
https://github.com/UU-Hydro/PCR-GLOBWB_model

Description:
PCR-GLOBWB is a large-scale hydrological model intended for global to regional studies and developed at the Department of Physical Geography, Utrecht University (Netherlands). PCR-GLOBWB provides a grid-based representation of terrestrial hydrology with a typical spatial resolution of less than 50×50 km (currently 0.5° globally) on a daily basis. Similar to other large-scale hydrological models, PCR-GLOBWB is essentially a leaky bucket type of model [1] applied on a cell-by-cell basis. For each grid cell, PCR-GLOBWB uses process-based equations to compute moisture storage in two vertically stacked soil layers as well as the water exchange between the soil and the atmosphere and the underlying groundwater reservoir. Exchange to the atmosphere comprises precipitation, evapotranspiration and snow accumulation and melt, which are all modified by the presence of the canopy and snow cover. The exchange with the underlying groundwater reservoir comprises deep percolation and capillary rise and vertical fluxes are shown in Figure 1. 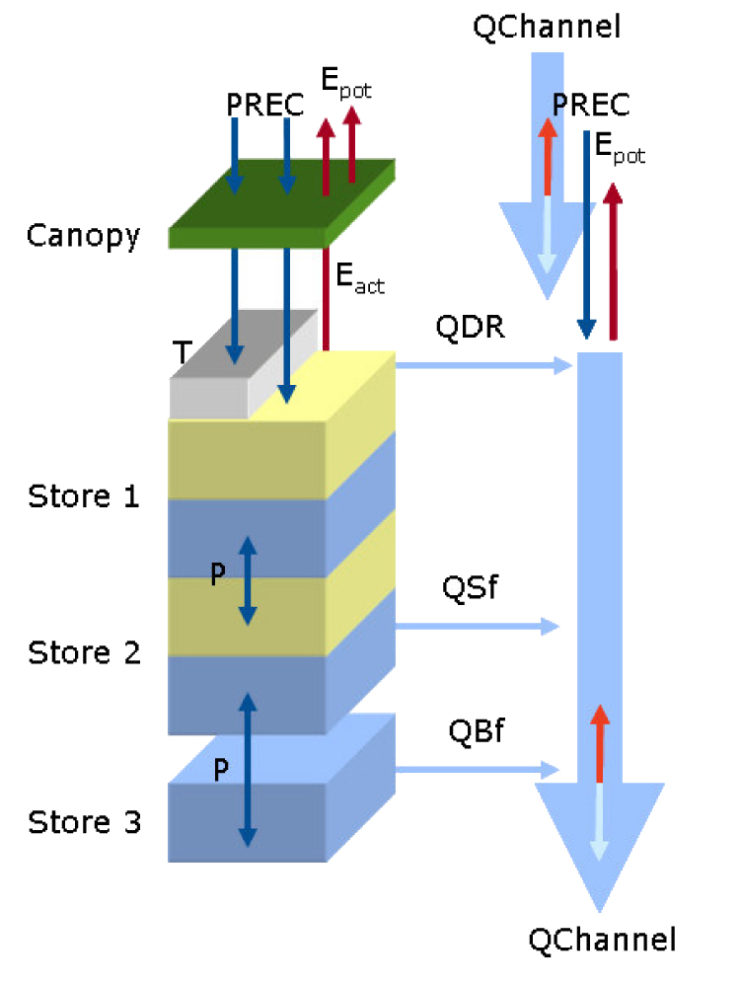 Figure 1: Model concept of PCR-GLOBWB. Left: layers describing the soil hydrology including the canopy, snow cover, soil layers 1 & 2 and the groundwater reservoir 3 as well as the exchange of moisture between them; right: specific runoff components and the direct gains/losses over the drainage network returning discharge along the channel when routed.

Saturation-excess overland flow is one of the three specific runoff components depicted in Figure 1. Also included are interflow along hillslopes and baseflow from the groundwater reservoir. River discharge is calculated by accumulating and routing specific runoff along the drainage network by means of the kinematic wave approximation for rivers and a stage-discharge relationship for lakes using variable time-stepping (Figure 3). Standard, these flow domains are evaluated for floodplains and lakes with a static extent. Optionally, PCR-GLOBWB allows to evaluate the routing scheme with lakes and floodplains of variable extent, thus simulating flooding and flood wave attenuation and for the inclusion of a prognostic reservoir scheme akin to that of Haddeland et al. [3]. Additionally, there is the option to include a surface water energy scheme to simulate water temperature and ice extent (Figure 4).

PCR-GLOBWB is partly coded in PCRaster and partly in PCRaster-Python. Scripts allow for a fairly easy conversion of the existing parameterization at the global scale to individual continents or basins at the original 0.5° resolution to finer scales (typically grid size of 1-10 km). On the global scale, PCR-GLOBWB is used in seasonal prediction, to quantify the hydrological effects of climate variability and climate change change, to compare changes in terrestrial water storage with observed anomalies in the Earth’s gravity field and to  relate demand to water availability in the context of water scarcity. On the regional scale PCR-GLOBWB is used to study the influence of wetland hydrology on methane emissions for the circum-arctic, to study water availabilty and adaptation strategies, and to quantify sediment, carbon and nutrient fluxes for a range of catchments including the Rhine, Mississippi, Mekong and Usa.